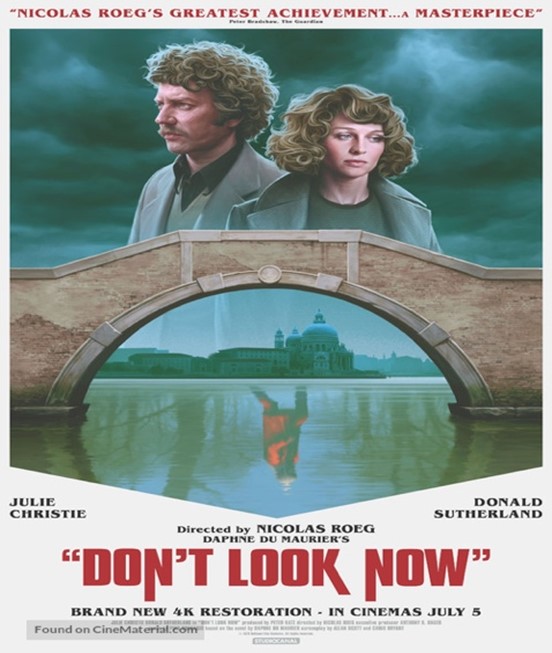 The fifth Du Maurier film showing by the SAP will be “Don’t Look Now” (1973), Nicholas Roeg’s haunting and enigmatic masterpiece based on the short story by Daphne du Maurier. The film is a delicate and profound depiction of a mature couple struggling with the traumatic loss of their child, its effect on their relationship and their differing attempts to process overwhelming mutual grief. Alongside this, the film explores forms of seeing, the way we see and don’t want to see, blindness and sight, prophecy and foreseeing, illusion and delusion, and the intensities of obsession.

Du Maurier takes us once again on a voyage of the unfamiliar, and Roeg’s masterful use of non-linear sequences, fractured and fast-cutting editing and subliminal visual clues evoke a dreamlike quality and a disorienting metaphorical darkness. She develops her fascination with identity, ageing, double-ness and the uncanny, locating the drama in Venice that seeps into our unconscious as she explores the dark underside of human nature. Venice in her story represents something otherworldly and sinister, a doom-laden shadowy place replete with emptiness, dark labyrinthine alleyways and desolate streets, suggestive of memories, strangeness, the intangible and the unknown.