The Society of Analytical Psychology 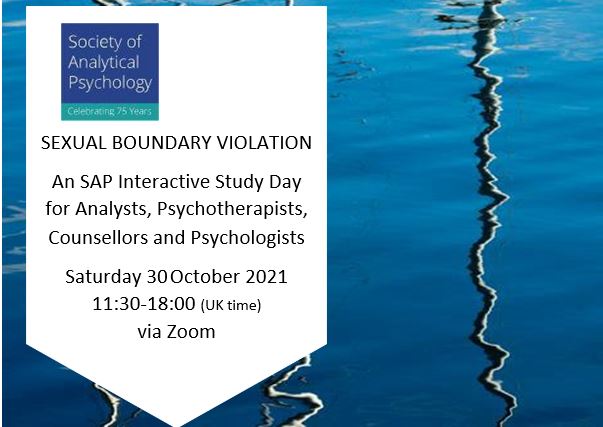 An SAP Interactive Study Day for Analysts, Psychotherapists, Counsellors and Psychologists.
Via Zoom.

Sexual Boundary Violation is the dark, hidden and shameful dimension of our work as psychotherapists. Its occurrence most often has devastating consequences on victims (of whom about 14% attempt suicide), transgressors (whose careers are often ended) and transgressors’ institutions (which reel from shock-waves of denial, disbelief and splitting).

Recent surveys reveal that around 7% of male and 1.5% of female therapists admitted to Sexual Boundary Violation; but these figures are probably an under-estimate because the incidences were self-reported. Ninety percent (90%) of patients who have been sexually involved with their therapist report feeling seriously harmed by the experience, some never fully recovering from the betrayal of trust and abuse of power.

This study day will explore:

Join us for a day of in-depth study and exploration of this important and complex subject, which has been brought more into public awareness by recent articles in the press.

The day will be chaired by Christopher Perry (retired Training Supervisor and Analyst, and former Director of Training, SAP) with a panel of international experts:

Dr Andrea Celenza is the author of Sexual Boundary Violations: Therapeutic, Supervisory and Academic Contexts. She is a Training and Supervising Analyst of the Boston Psychoanalytic Society, and Assistant Clinical Professor at Harvard Medical School.

Jonathan Coe is the founder and Managing Director of the Clinic for Boundary Studies. He has published on the typologies of boundary violators, and has spoken at a wide range of conferences and events concerning professional misconduct.

Dr John Hook is a Consultant Medical Psychotherapist in private practice. Formerly, he specialised in psychoanalytic psychotherapy at St George’s Hospital (London), and in group analysis at the Institute of Group Analysis. He has published on Sexual Boundary Violation and is an Associate of the Clinic for Boundary Studies.